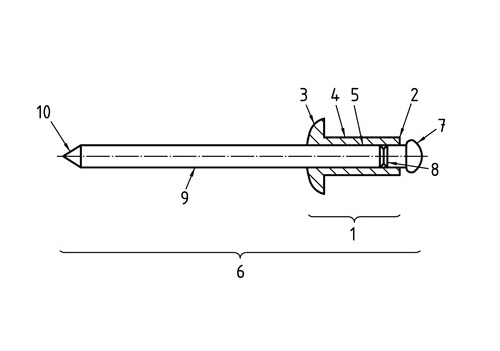 part extending from the underside of the head to the rivet end: Its cross section is normally circular.

extremity located at the opposite end of the shank to the head: It may be closed, open or split.

axially located hole in the body: It may either extend through the full length of the body or only partly through it.

component, usually with a break area, pre-assembled in the blind rivet body

Note 1 to entry: It has an upset head and its shank may be plain or grooved.

upset portion of the blind rivet body, remote from the head, formed by the mandrel during setting

after insertion of the blind rivet through the components to be fastened, mandrel pulled axially with its head upsetting the end to form the blind head

after setting the body, mandrel pulled completely through the body resulting in a hollow rivet

after setting the body, mandrel breaking at or near the junction of the mandrel head and its shank, the head and a small portion of the shank of which are retained in the rivet body

after setting the body, mandrel breaking at the junction of the mandrel head and its shank, at which point both shank and head are ejected resulting in a hollow rivet

rivet body, hollow throughout its length and able to use any type of mandrel

rivet body, the end of which is closed and remains closed after setting

rivet body, the end of which is split axially into two or more segments

rivet body, the shank of which has axial slots between the underside of the head and the end

<after setting of the rivet> rivet, the mandrel of which is retained in the body having its end generally flush with the top of the blind rivet head

load necessary to break a break pull mandrel after setting